During the Presidential campaign, NBC is using Foursquare to track check-ins from the candidates and their teams -  Lost Remote

Jeep's 'Jeep-in' Promotion - Using geolocalization, Leo Burnett (Warsaw) created an interactive game for Jeep in Poland, encouraging players to hunt for rewards in remote places and check in, or 'Jeep in', for a chance to win a Jeep Grand Cherokee – Video

'Slavery Footprint' (by our friends at mtzhf.com) guides users through an 11-question survey to unveil the truth about forced labor. It was entirely created in HTML5 to be platform agnostic (and integrates seamlessly with Facebook and Twitter) – Website
Using the new Pinned Tweets feature, Dell, GE, and Intel featured videos on their Twitter stream that appealed to their BtoB customers -  Social Media B2B

Warner Bros. is launching a new social media site called "Out My Window" that will focus on photo sharing through various platforms -  Simply Zesty

Lucasfilm's forthcoming movie ‘Red Tails’ website (by Dojo) lets you dogfight with a P-51 fighter. You can also enhance (and personalize) your experience by logging on using Facebook Connect – Website

Schweppes ‘Unexpected Future’ (via Red Urban, Amsterdam) is the latest brand to leverage the Facebook Timeline. The app takes you on a trip through your 'unexpected future' - revealing what could happen in your career, romance and more – Facebook 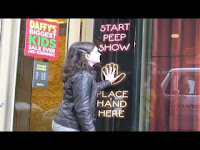 To drive traffic to Daffy's in New York City's Times Square outlet, a Times Square staple from its more sordid days was brought back – ‘The Peep Show’. A 3-D holographic model strips down – up to 80% off her clothing - while an accompanying neon sign keeps pace with each percentage-off increment – Video

After being deadlocked over the extension of a payroll tax cut, the White House turned to Twitter to gain public support -  The Realtime Report

GM, Zipcar, and Toyota are using social media in unique ways to engage with the next generation of auto customers -  ClickZ

Hershey's three pillars of Facebook engagement - Awareness, content, and agility are crucial to getting Facebook users to check out your brand or, in Hershey's case, brands – Article

In anticipation of the upcoming Grammys, PepsiCo and Pandora have teamed up to make a mixtape for fans to share online -  Giant Step

A QB telepresence robot that allows you to roam the halls of your empire and bark orders - no matter where you are!? Awesome. The self-balancing robot is controlled from a web interface and runs about $15,000 - Website

Want to build a brand that stands the test of time?  Take a page from organized religion. Notable brands and religions have a lot more in common then you’d think – Article

NOTE:  FOR MORE ARTICLES AND POSTS FROM THE LAST WEEK PLEASE VISIT US ON TWITTER @GOODBUZZ.  IF YOU HAVE INFO, ARTICLES, CASE STUDIES, OR OTHER EXAMPLES OF (TTL) PARTICIPATORY MARKETING BLISS - PLEASE FEEL FREE TO EITHER POST VIA FACEBOOK OR SEND VIA E-MAIL AND WE’LL TAKE CARE OF IT FOR YOU. ;) PLEASE IDENTIFY IF YOU FIND A DEAD LINK (AS THEY WERE ALL LIVE AT THE TIME OF THIS POSTING) 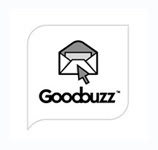